The Early Days In Wilton Rise

Until the mid-19th Century, York had only one Methodist Circuit. It numbered approximately 3,000 members and embraced upwards of 30 villages.

In 1867 it was separated into two Circuits with the river as the dividing line. Wesley Chapel, in Priory Street, which had been opened the year before, became the head of the new circuit with 12 Chapels.

The advantage of the new arrangement was soon evident in the many new chapels which shortly appeared.

One of the first in the Wesley Circuit was a Mission Chapel in Wilton Street (now Wilton Rise). It was built in 1872 at a cost of £800 and was put there to minister to the needs of those employed at the nearby Railway Works.

The Church In Acomb Road

Thirty-eight years later, in 1910, the work was moved to new premises in Acomb Road and the Society we now know affectionately as ‘Holgate’ was established. The stone-laying ceremony for the new premises took place on 13 October 1909, and the opening date was 14 September 1910, the ceremony being conducted by Rev. I. T. W. Stafford.  The opening Sunday services were held at 10.30 a.m. and 6.30 p.m., on Sunday, 18 September, only evening services being held for the remainder of the year.  Four ladies opened the doors with silver keys presented to them by four Trustees, Messrs. Barker, Leadley, Edwards and Carter, the latter being the father of Mr. C. Carter, one of our present local preachers.  The Minister at the time was Rev. W. R. Dent.  The cost of building the premises was £3,500 (it is now insured for over £850,000).  Mr. Carter formed the first choir, and Mrs E. L. Brown (the mother of Mrs. Harold Avison) was the organist. The Trust debt on the premises was cleared in 1918.

The land adjacent to the present building was intended to be for a church, the present building being described as a School Chapel.  However, the Society never grew large enough to proceed with that plan.  In May 1924, the young people persuaded the Trustees to lay a grass tennis court, costing £100, on part of the land, and this was paid off by the members of the Tennis Club by 1956.  It was extensively used even though the members had to do their own cutting, rolling, marking out, etc.

The Growth Of The Church 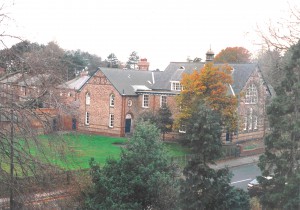 The strength of the Society has fluctuated through the years.  The earliest recorded membership was 43, in 1933.  This figure reached as high as 157 in 1963, but fell steadily to 93 in 1985.  At one stage, in 1975, consideration was given to closing the church in view of the diminished support. In 1934 consideration was given to the prospect of building a new church on our land as a joint effort with St. Paul’s C. of E., but after discussions it was decided that the time was not then opportune for such a project.

For a number of years, from about 1946 to 1966, there was a strong Christian Endeavour influence in our Church.  Unfortunately, owing to lack of leadership, and to the removal of several of our up-and-coming young people, the C.E. Societies had to close.

The post-war years saw development much more in the way of outward-looking activities.  The Guides started up in 1944, the first Scout Group started in 1950, and the Toddlers’ Club started in 1967. A men’s weekly meeting, joint with St Paul’s, started in 1966, but lapsed in 1971.

By 1960, at the time of the Church’s Golden Jubilee, the weekly ‘religious’ timetable included the following:
Worship each Sunday at 10.45 a.m. and 6.30 p.m.
Junior Church Worship at 10.45 a.m.
Sunday School and Young People’s Classes at 2.p.m.
The ladies’ Sisterhood meeting on Tuesdays at 2.45 p.m.
Christian Endeavourers on Tuesday Evenings – Juniors at 6 p.m., Young Folk at 7 p.m., and Seniors at 8 p.m.
The Society Class meets for a fellowship on Thursday at 7.p.m. 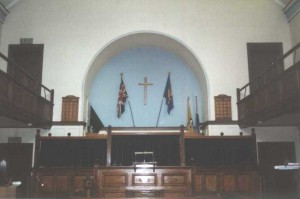 It is interesting to see the names in the Baptismal Register which goes back to the early days of the Wilton Street Chapel, the first name being Thomas Beevers, baptised on 1 January 1873.  Mrs H. Avison was one of the first in the register, being baptised at Holgate on 5 July 1911. 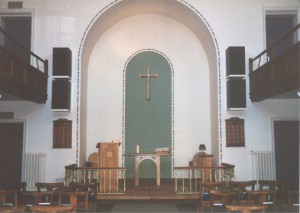 In 1999 the church underwent a fairly major refurbishment with the main church being dramatically changed.

Our witness at Holgate has continued through two world wars, and a warm welcome is extended to anyone who may read this and who has no regular place of worship.

If you have any further information about the history of Holgate Methodist Church please contact us!

Now we are able to meet in person, and with decreased social distancing, we are gathering most Sundays at the church, as well as continuing to worship online with Zoom at the same time. A small number of our services are presently live streamed from Acomb Methodist and streamed into Holgate and Southlands, but the majority are now led live locally. We meet at 10:30am every Sunday, for a time of worship, which includes worship songs, bible study, and some prayer together.

For more information, please visit our Worship during COVID-19 page.

Prayer of the day